Burnley has lost one of its premier sons with the death of Jack Horsfall. With his passionate interest in the Great War, and especially his beloved Burnley, he inspired more people than he could ever have imagined.

Goodnight Jack, your talks were always a privilege and we always knew what you meant ! 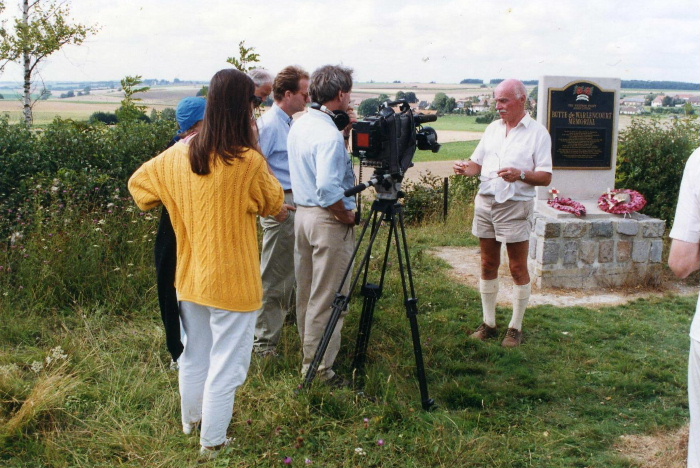 It was with great sadness that the news of Jack’s death was received in early January from Peter Gill, the Cheltenham and Gloucester branch Chairman. Jack passed away on Christmas Eve, at home in Hucclecote, Gloucester, after a long illness which he had faced with great courage.
He had been born in the Whittlefield area of Burnley, before joining the Army as a boy soldier in 1938. After passing through the Army Technical School he joined the Royal Electrical and Mechanical Engineers (REME). His first posting was in 1943 to India, where he was promoted to sergeant at the age of 20. He later served in the Dutch East Indies, and as a warrant officer he saw service in Burma assisting the newly-formed Burmese Army. Jack left the Army in 1963 and worked for a further 32 years in the engineering industry.
Jack’s involvement in the Great War was inspired by his father’s many stories and as a result of business trips to France. He was passionate about his subject and his branch lectures were most informative. As a military historian he had also been involved in the production of a number of Great War TV programmes. He was a prolific researcher and author, his books include - ‘The Long March: Story of the “The Devil’s Own” B/210 Burnley Battery Royal Field Artillery 1914-19’ – published by Lancashire County Council; and co-written with Nigel Cave, in the Pen and Sword Battleground Europe series – ‘ Cambrai : Hindenburg Line’, ‘Mons: 1914’, ‘Bourlon Wood’, ‘Serre: Somme’, ‘ The Battle for Flesquieres Ridge’.
Jack also wrote the definitive –‘History of the 42nd (East Lancashire) Division in the Great War’. Jack really lived up to the Division’s motto – ‘Go one better’. He was a gentleman – one of Lancashire’s finest.
He leaves his loving wife Maureen, daughter Christine and three grandchildren.
Jack will be sadly missed by his many friends in Burnley, the British Legion and the members of the WFA Lancashire and Cheshire branch.