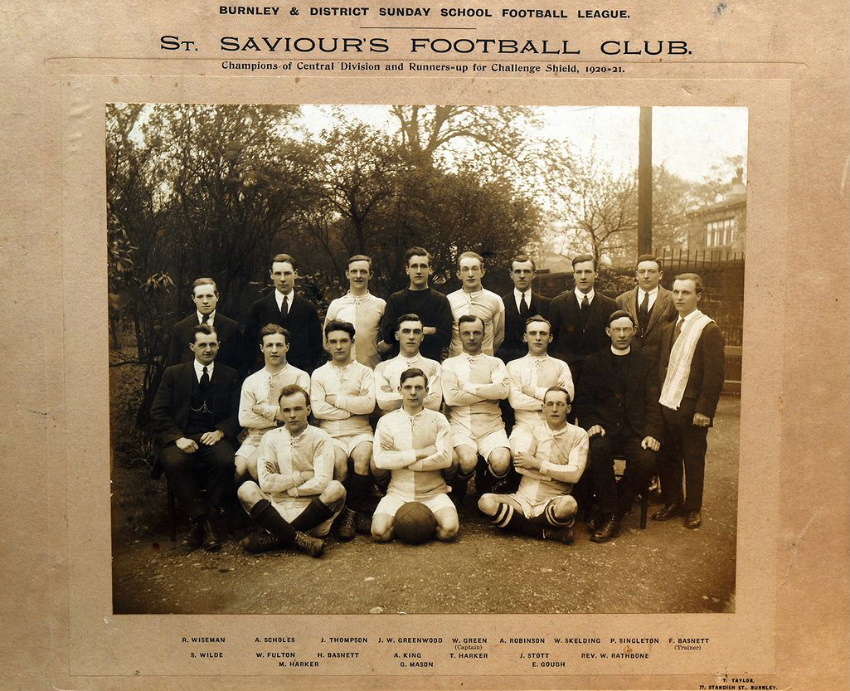 They are 1920-21 but include my grandfather Thomas Harker and great Uncle Miles Hutchinson Harker who
lived at 13 Celia Street and were both Burnley soldiers.
I know this picture was taken after the war but feel sure some more of the men would have been Burnley soldiers.
Rev. Rathbone was a friend of my Grandfathers and I met him when he was probably about 70, I was pleased
to find him on this photograph as a young man with,I think a twinkle in his eye. I lived with my Grandfather until
his death at the age of 85 in 1976.
Together with their brother James Harker also of Celia Street they served and survived the war, Miles and Thomas
were both wounded. I have been able to find the service records of James and Miles and they make very interesting
reading but the one I really want, Thomas Harker I just cant find. I know he was badly wounded on The Some

Just for the record, Thomas won several gold medals plying football and during WW11 they were melted down to provide the gold for my mother’s wedding ring.
My parents were married at St. Saviours in 1942 when my mother was an “airframe Fitter” at Burnley Air Products. (BAP). My Grandfather Tom was an inspector with the same company. Mum told me she was tasked with fire watching at the factory during the blitz. I was born in 11 Celia street in 1945. I would be interested to know what work was carried out at BAP during the war?