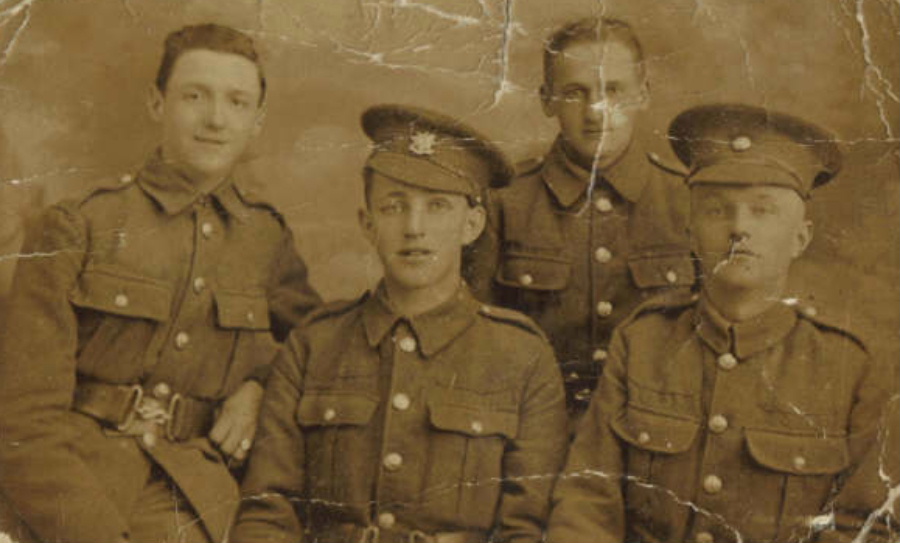 The man in the back row between the two men with caps is Wilfred Ratcliffe who lived at 76 Padiham Road. As I have details for two men at this address, with this name I am not sure which one this is. They could have been father and son, or even the same man who served in different regiments

Following much family discussions, comparing the one photographs we
have of dad as a young man we feel with some degree of confidence we
can put names to two of the men.
From the left, sitting without a hat, Thomas Edward Hargreaves, dad’s
best man and lifelong friend but I have no address for him. I believe
his father had a garage business on Trafalgar somewhere. Second, with
the hat at an angle, another of dad’s habits, Townend Entwistle of 16
Carr St. I have attempted for many years to track his service down but
his are part of the lost records, we believe he may have served for
some time with the South Wales Borderers as part of the army of
occupation, I have some post cards he brought back from Bonn and the
Rhine.
We know dad spent some time at a military hospital near Whalley, as we
drove through Whalley to the Trough dad once remarked that he was sent
to a big house near there when he was wounded and gassed. His mother
took the tram to Padiham then walked over to Whalley to visit him.