Planned to neutralise the key Belgian ports of Zeebrugge and Ostend, both used by the German Navy as a base for submarines and light shipping, the Raid on Zeebrugge was launched early on the morning of 23 April 1918.

The raid was originally proposed by British First Sea Lord, Sir John Jellicoe, shortly before his abrupt dismissal at the close of 1917 (as a consequence of his ongoing reluctance to back First Lord of the Admiralty Sir Eric Geddes' convoy policy).

Jellicoe gained acceptance of an attack in principle - actually formulated by Dover port commander Sir Roger Keyes - by stating to the cabinet his view that Britain's continuing ability to wage war depended upon blocking the exits from both ports, and thus denying German submarines convenient bases.

Thus the Zeebrugge raid was planned in much secrecy and conducted (in part by a volunteer force) by 75 ships following its formal approval by the British Admiralty in February 1918.

The main force of the attack was to be at Zeebrugge, with a smaller offensive launched against Ostend. In preparation for both however the elderly British cruiser Vindictive was used to land 200 troops at the entrance to the Bruges Canal (at the mile-long Zeebrugge mole), in order that they could destroy its formidable shore batteries.

The operation began badly however. The prepared smokescreen to cover the Vindictive as it landed its troop contents proved ineffective in the face of unexpected winds.

Under crippling fire the old cruiser moored in the wrong location, its guns effectively out of action. However an old submarine did destroy the mole connecting the bridge to the shore after it exploded containing explosives.

The loss of the Vindictive's guns was significant: without their crucial support the shore batteries remained untaken. In turn their sustained fire also disabled a further three ancient British cruisers - Thetis, Iphigenia and Intrepid - packed with concrete and which had moved into the inner harbour, preventing them from halting and scuttling themselves in their correct pre-assigned locations at the narrow entrance to the canal. 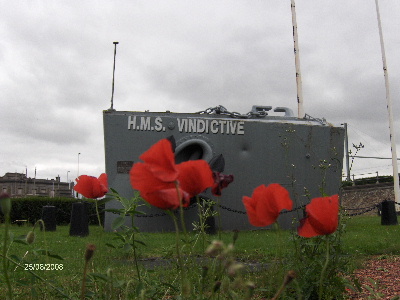 If the raid upon Zeebrugge produced initially unclear results, the smaller attack upon Ostend was an unequivocal failure however. Two old cruisers, intended as blockships, failed to reach the harbour entrance. A subsequent attempt made to cripple Ostend similarly failed on 9 May.

Represented at the time as a tremendous British victory by Allied propaganda (with the consequence that its devisor Sir Roger Keyes was ennobled), and by the Germans as a demonstration of their success in holding each port, the Zeebrugge raid did not in reality hinder German operations from either port for more than a few days.

Some 500 British casualties were incurred during the operation (of which approximately 200 were fatalities). A total of eight Victoria Crosses were awarded for the night's action.

Private Harold Mercer CH2055S Royal Marine Light Infantry - a Burnley man, took part in this raid and subsequently died of the wounds he received that day

Click on their names above to see further details