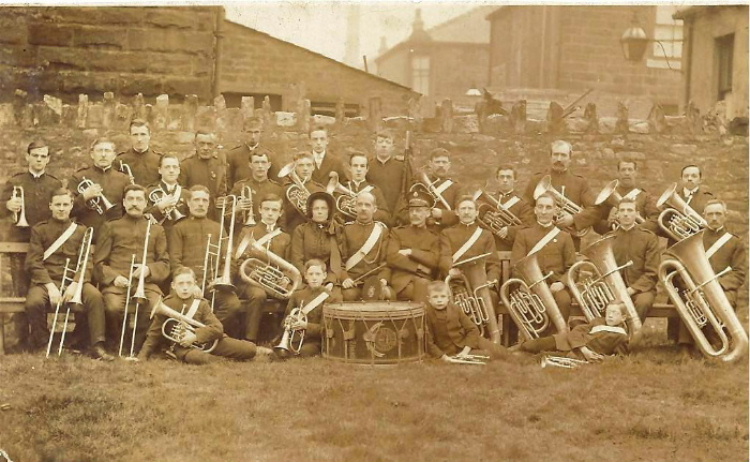 It was obviously taken in the grounds of the Vicarage on Tay St / Accrington Rd, (I don't know whether it was the Vicarage for Acc Rd Meths or The Trinity C of Es at the Mitre,) which was a nursery school for many years,maybe from the late 4os,
One or two of my distant relations are included one of which, Harold Roberts (KIA East Lancs Tyne Cot memorial) is the small man who is standing on the right hand end of the middle row,
The tall man,on the left hand end of the rear row,is Willie Barker who I believe was a survivor of the sinking of the Royal Edward,(re Andrew Mackay's booklet,) The 5th man from the left on the middle row ( with instrument to his lips) is Harry McCarthy who certainly survived service in the infantry in the Great War,also the man 2nd from the right on middle row ( there are only 5 men on back row) is Leonard Hayes no 19651 East Lancs, 9c/comp, 21 Athol Street Burnley,
Being brought up as a Salvationist,I well recall several of these men,in the evening of their existence ,
3 of my Mother's uncles are included,(married into the Veevers family girls,)